On my father’s gravestone, the inscription begins:

‘With love we remember

Dad passed away two years ago this week so I have been thinking about him a lot.  And about IT ALL.

I’m so grateful that I can say today that he truly is remembered with love.  There were many times I didn’t think of him fondly when he was alive.

The Smith side of the family is renowned for the harshness of their lives and their longevity.  Dad’s great granny had 12 children, twice twins, lived in poverty and died aged 84.  His grandfather passed away at 86, after a hard life and fighting in both the Boer War and the First World War.  Dad’s mum, my granny died aged 99 and his dad had been 83. 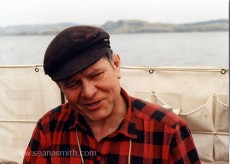 Dad could have had a long and healthy life, but he chose not to.  His alcoholism robbed him of a ripe old age,  and in the final few years, had robbed him of his mind.

Dad died in a fall, at night, after drinking all evening as usual, alone in his chair.  There had been many accidents before: leaps from high windows, car crashes, being knocked over, fights and falls into the sea from his beloved boat. There were longstanding jokes about him having nine lives… in fact, he’d gone through many more than that. 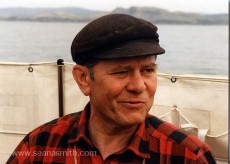 But long before it finally killed him, Dad’s drinking had robbed his family of a husband, a father, a brother, a son; had robbed us all of a person we loved and longed to have in our lives, fully present.

And his drinking had made him mean, cruel, abusive, violent at times too.  All that had a catastrophic effect on all of us, but especially on my only brother.

Life is not black and white.  Dad could be fun, adventurous, charismatic; he was a very successful businessman.  He could be scary, aggressive, unpredictable, embarrassing, foul.

True forgiveness only came, for me, once Dad had dementia.  Until then, I still carried a hard kernal of fury deep inside.  Latterly, I wasn’t angry for myself at all (grateful for the years of therapy!), however fury remained for what had become of my brother, the waste, the pain.

Then, seeing Dad like a lost little boy, a gentle old man, made even that rage fragment and waste away.

‘When he lost his mind, we finally found our father,’ I said to a friend.

I saw Dad just once as a gentle old man, on a fast visit with my second son, the twins were only three and it had been too hard to leave them for several years.

When I said goodbye to Dad, I knew I wouldn’t see him again.  We all knew that he was dying.

In fact, his fall came only ten days after I got back to Sydney.

I am so, so grateful that I saw my dad at the end of his life, and that I was kind to him, spoke gently, made him cups of tea.

Nothing could ever have stopped my Dad’s drinking, believe me, everyone had tried their hardest.  Except Dad.

Dad died with his wife, brother and two daughters by his side.  The accident that killed him was a violent one, but death itself came peacefully. 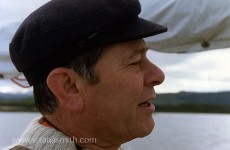 Dad was buried in a beautiful graveyard in the rolling farmlands of East Lothian, in Scotland.   Peaceful now forever.

I’m linking this to Weekend Grateful over at Maxabella’s.  Thanks Maxabella for having this link, it encouraged me to get some of the words out of my head and written out.  And I have needed a good cry all week.